My Friends Meena, Ploy and Sanya 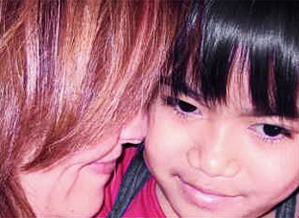 I shielded my eyes from the sun and squinted, looking at the three girls who sauntered along the dirt path, the dust dancing and nipping at their heels. As they made their way around the circle, they looked like one person: same height, their straight black hair cut in the same short style. They had linked arms and were moving their mouths in unison, but they were too far away to hear.

The girl in the middle was a bit unsteady on her feet, so the two on the outside slowed their gait to match. It was then that I knew who they were: Meena, Ploy and Sanya, each 7 years old. The HIV virus had recently attacked Ploy’s nervous system and she was just beginning to get her strength back. But she would be blind for the rest of her life.

As they got closer, I yelled out a greeting. Meena and Sanya immediately yelled back, “Hello, Mommy El,” with Ploy repeating the greeting a second or two later. They picked up their pace a little and Meena held tighter to Ploy’s left inner elbow, where she has deep scars from a bad case of herpes. They opened their mouths in unison and started to sing.

As they rounded the corner in front of me, I asked, “What are you doing?” Sanya looked at me with raised eyebrows while the other two continued with their tune. “We’re singing!” And she rolled her eyes and laughed. I watched their backs for a few minutes as they carried on with their parade of three.

Sometimes I am like Meena or Sanya, holding onto the arms of a weaker friend as we journey through this dirty, dusty life. But more often than not, I am like Ploy. I can’t see where I am going. I feel weak. I am unsure of any obstacles in my way. That is when I need someone to “come alongside”—to link arms, slow their stride to match mine and encourage me along.

It didn’t matter to Sanya or Meena that Ploy was now blind and unsteady on her feet. They became her eyes. They became her legs. They became her courage. The funny thing is, both Meena and Sanya are HIV-positive, too, as well as having other health and emotional issues. They are far from perfect. But they had what Ploy needed, at the perfect time.

Friends for the journey

I am reminded of the ones who took their paralyzed friend to see Jesus. I wonder what they talked about, as they each grabbed a corner of the mat. Was the man afraid he would be dropped? Or did they all sing together, their hearts full of joy and of faith that their dear friend would be healed?

When they dragged their friend up onto the roof—ripping away the slats, the beams and the clay, showering the people below with dust and straw—were they laughing at the absurdity of it all, but full of that adrenaline rush you get right before something awesome is about to happen?

After they lowered him down to the feet of Jesus, their friend was told to stand up, pick up his mat and go home. I imagine his companions peering through the hole in the roof, whooping and hollering and giving each other high fives before they scrambled down. I imagine the celebration they had together, as they walked back home together, singing and praising God.

I think the secret lies in the singing. If we keep carrying each other to Jesus, through prayer, through physically taking them into our arms and pouring our love in, we will live lives of joy, which will overflow into song.

Link arms with someone. Match your stride with theirs. And sing.